For nearly three bloody years, the civil war in Syria has caused violence on a horrific scale. Roughly 120,000 were killed before the U.N. stopped counting, nearly 5 million have been internally displaced, and since it opened in July 2012, more than 120,000 Syrians have found refuge in Za’atari, Jordan.

By many estimations, Za’atari is the world’s second-largest refugee camp, behind Dadaab in eastern Kenya, but the term “camp” doesn’t do justice to the size, scale and complexity of either settlement. “If you think about a refugee camp, what you basically have is a small city,” says Dr. Stephanie Kayden, director of the Humanitarian Studies program at Harvard University. “You have not only tents, but you have a hospital, schools, a market, and a food distribution center.” In many ways, Za’atari resembles a rather large city–there are 12 medical clinics or hospitals, 477 communal water tanks and 12,000 students packed into three schools.

This satellite imagery comparison from DigitalGlobe, displayed first by TIME, shows the growth of the camp, which stretches across 2 square miles of the northern Jordanian desert. Nearly 1,000 American football fields could fit inside its boundaries. At one point, the camp’s population grew to more than 120,000. Numbers have begun to decline in the camp, but in Syria, violence continues to rage, ensuring that Za’atari will remain home to thousands of refugee for perhaps years to come. 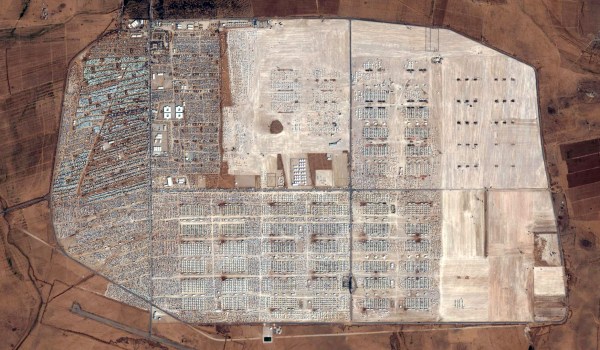 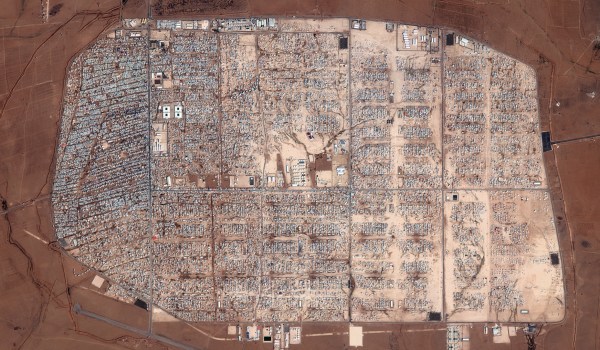