South Sudan’s Jan. 23 ceasefire was supposed to put an end to more than a month of violence that killed roughly 10,000 people, displaced more than 800,000 others, and threatened to unravel the fragile social fabric of a fledgling state that has been independent for just 31 months. The warring parties — the government of President Salva Kiir and rebel groups loosely arrayed behind sacked former vice president Riek Machar — agreed in neighboring Ethiopia to a truce. New rounds of talks were set to restore order to the world’s newest country.

But there is no peace in Malakal, a key city in an oil-producing region in the country’s northeast. The city has borne the brunt of violence that has persisted across the country, putting the fate of the truce in jeopardy. Last week – despite a ceasefire that both sides have been accused of violating – rebel forces attacked the city and expelled government forces. United Nations peacekeepers who patrolled the streets after the battle reported on Monday finding more than 100 bodies scattered along the road and said the city was looted and burned. South Sudan’s Interior Minister deemed the rebel violence “a flagrant violation of the cessation of hostilities agreement signed by both sides.”

“Malakal is deserted, with houses burned throughout and countless dead bodies strewn in the streets,” Carlos Fransicso, an emergency coordinator in Malakal with the aid group Doctors Without Borders, said in a statement Wednesday. The organization reported finding 14 bodies at a hospital, some showing signs of being shot in their beds. “I can find no words to describe the brutality.”

In the Feb. 20 images below, published for the first time here, the extent of the conflict’s destruction and ferocity is evident from space. The images, captured and distributed by the the Satellite Sentinel Project, show that nearly half of the city is flattened, with indications that the fires were deliberately lit to wipe out houses. In just a three day period between satellite shots taken on Feb. 17 and these images, 1500 structures were destroyed, according to the Satellite Sentinel Project. In total as of Sunday, 3,820 residences and 170 market stalls and other structures in Malakal have been razed.

“War crimes are being committed with impunity,” says Akshaya Kumar, a South Sudan analyst for the Enough Project, an advocacy group based in Washington, D.C. that focuses on genocide and crimes against humanity in central and east Africa. The images are one way to document the atrocities and provide evidence to hold the perpetrators accountable, she says. “What we’re able to do is to independently and systematically and consistently document what’s happening,” Kumar said.

The Satellite Sentinel Project is a joint venture comprising the Enough Project, the humanitarian group Not On Our Watch—co-founded by actor George Clooney—and the private satellite imagery vendor DigitalGlobe, which captures the images and provides analysis.

Click and drag the slider on the image to compare shots of Malakal before and after the recent violence: 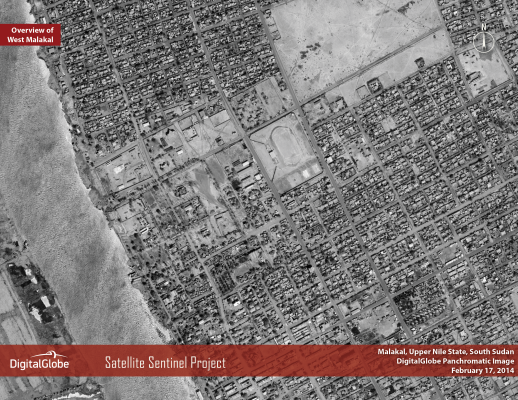 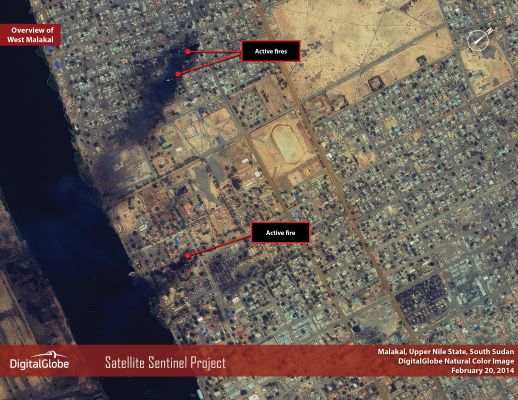 DigitalGlobe imagery taken on Thursday, Feb. 20 showed active fires at multiple locations around Malakal. A later shot on February 23, after the smoke cleared, revealed the extent of Thursday’s fighting, which has burned or severely damaged nearly 4,000 structures in the city. “In Malakal, I would say we are approaching about 40 to 45 percent of the city being destroyed,” said DJ Mallmann, a senior imagery analyst at DigitalGlobe 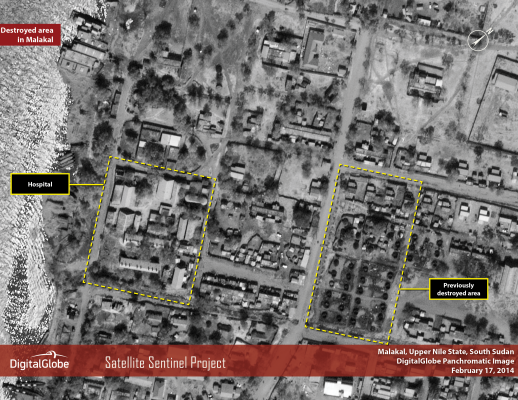 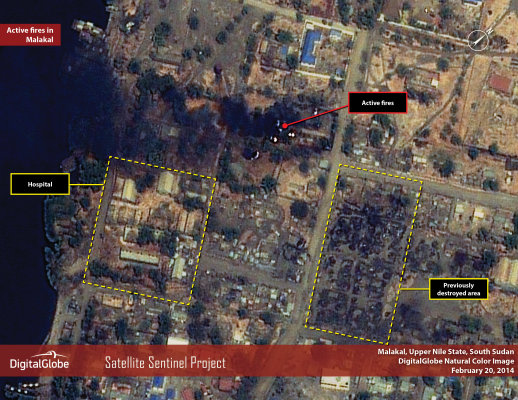 Fighting before Feb. 20 destroyed more than 700 residences near the center and eastern sides of the city. “In many cases that we see, you can see where some houses have been skipped and it’s pretty definite that they have intentionally been burnt. In this latest shot, there probably was a combination of that going on in Malakal,” Mallmann said. A residential area just north of the hospital was set ablaze on Feb. 20, causing more destruction. 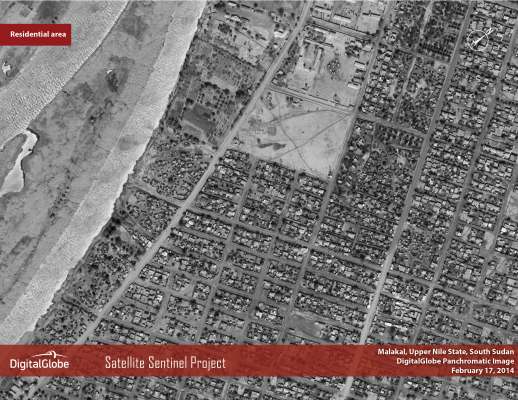 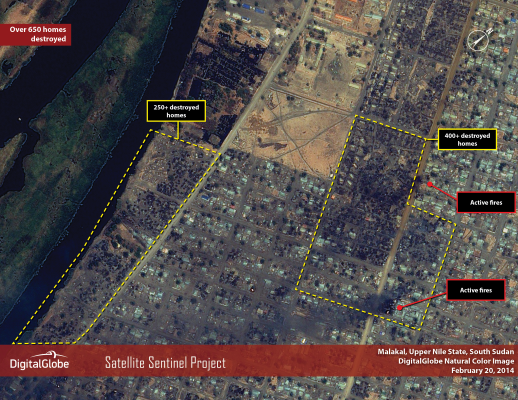 This image shows the destruction of more than 650 residences. According to imagery from Feb. 23, this southern portion of Malakal suffered the majority of the recent destruction.